Our Green Wall…Love It or Hate It?!

Let me start by saying that I love all of you who read this blog. I also love the thousands of you who follow us on social media and vote/weigh in when I ask! That said, sometimes I disagree with your answers. HA!

Mark and I wanted to build a green living wall ever since we bought our second house. We think it’s a bold design decision that adds a lot of cache to the house.

We ended up with a “fake” green wall because I would likely kill a living one. Mark found this boxwood from Artificial Plants Unlimited about a year ago and it’s been sitting in the basement ever since.

When we gutted the downstairs, Mark specifically rebuilt this wall next to the front door with an inset so the green wall could sit in it. He also installed electrical wires so we could light it from the back.

A few days ago, we finally hung the wall together, and we absolutely love how it looks! People have very strong opinions about it. Some love it and others don’t like it or don’t get it.

We’ve seen green walls in hotels, restaurants and coffee shops and just think it looks so cool. I love it in our home! 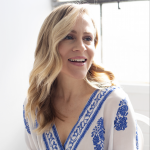 An Emmy award-winning journalist and TV host, Courtney Brennan has galvanized a huge online community around her very real and raw stories of #MomLife! A published writer, speaker and influencer, Courtney has become a strong and vocal supporter for mothers and families. You can follow her at @itscourtneybrennan on Instagram and @CourtneyBrennanTV on Facebook where she shares the realness that is #WorkingMomLife, her home renovations and those ever-important #OOTD More about me »

Leave me a note

Subscribe to get my email updates so that you don't miss a thing!